This is the thirteenth edition of the Wisconsin Domestic Violence Homicide Report. End Domestic Abuse
Wisconsin has been tracking and analyzing all incidents of domestic violence homicide that occurred in
Wisconsin since 2000. This report documents fatalities from 2014.

Any report about homicides cannot do justice to the immeasurable losses that it summarily recounts. The victims who perished in 2014 were each unique human beings with more to give to their families, friends, neighbors and the world. These pages do not—and could not—represent who they were and who they would have become.

The experience of remembering a loved one who has passed away is unlike any other human experience we have. Rekindling those memories puts us at a disorienting crossroads between the past and the future. Memories of the times spent with the deceased person can be so visceral that the person is almost present to us. Yet this vivid intensity often feels fueled by the loved one’s irrevocable physical absence, by the knowledge that our lives will move forward into the future without her.

The Wisconsin Domestic Violence Homicide Report also stands at a nexus between retrospection, the here and now, and time as it moves forward. This document reports on past events, the cold and hollow ways in which 43 Wisconsinites lost their lives to domestic violence. However, the report is not written merely to be an archive with the goal of preserving facts and details about the past. Its purpose is oriented towards the present and the future; the report is a call to action and a call for improvement.

This year’s edition of the report, in particular, is organized around a fusion of the past, present and future. The report contains a discussion of the risk factors that are predictive of domestic violence homicides. These risk factors are discussed under a portion of a petition for a temporary restraining order, written by a victim who, at that time, is writing about a perpetrator who would go on to commit a domestic violence homicide. The handwritten calls for help preserve a moment from the past. In the present, we now have research that shows these pleas could have been life-saving forecasts of lethal violence in the future. The report attempts to weave the past, present and future to strengthen our resolve and to use our knowledge about risk to support, protect and empower victims going forward. 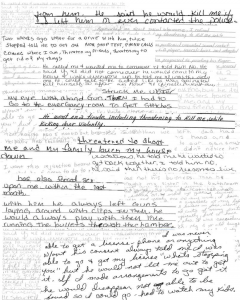