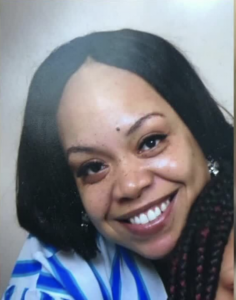 Milwaukee police are investigating a double shooting that happened near 36th and Clarke on Thursday morning, Jan. 6.  Police say 41-year-old Quinette Walters of Milwaukee suffered fatal injuries. A 14-year-old girl sustained life-threatening injuries. She was transported to a local hospital for treatment.  Investigators say there is no threat to the public and they know who they are looking for, but no arrests have been made.  A double shooting is pushing this neighborhood to its breaking point. Christal West is a community health specialist with Amani United:  “She died on this cold, cold ground. People and our children are just becoming very numb to death. It’s almost like breathing,” she said.

Milwaukee police say the shooting happened just before 8 a.m. Thursday.  Police left as more gunshots rang out in a separate incident nearby. Officials say a 41-year-old woman was killed here and a 14-year-old also suffered life-threatening injuries.  West says they are mother and daughter, with the girl escaping the home through a window.  “See this screen, all the way toward the back?  Jumped out of the window for whatever reason,” West said.  Police are calling this an act of domestic violence:  While investigators say there is no threat to the public…west points out this isn’t far from where 25-year-old Mallery Muenzenberger was found dead in October.  “Not even 100 yards – you have a body that was found,” she said.  Another case of domestic violence that had the community searching for her son, a 3-year-old Major Harris, who was later found dead.  “This didn’t have to happen.  None of these murders have to happen.”  An autopsy is scheduled for tomorrow.