Melanie lost her mother to a domestic violence homicide in 2007.

“What happened to you isn’t your fault and you can’t let it define who you become. It will always be a part of you, but it’s not the only part”.

Exposure to Violence and Death: Addressing the Needs of Children within a Domestic Violence Context. This program was developed by Intern Tracy Shoberg at End Abuse WI:

“Some of the biggest victims of domestic violence are the smallest” Globally, 275 million children are exposed to Domestic Violence. The United States accounts for 2.7 million of those children.

Children who experience loss are affected by their own experience and the reactions of those around them. When a loved one dies as a result of violence, children and adults alike must grapple with a grief that is compounded by the trauma associated with a violent and unexpected death. The psychological effects on children mourning a violent death may be different than what is expected or experienced when a death is not violent. This type of grieving cannot be generalized however, as every child moves through grief in his or her own way.

Child bereavement organizations provide support for children experiencing grief stemming from the death of a loved one. Peer support is typically a cornerstone of such programs but other tools might be used, such as traditional counseling, art and play therapy, support groups and grief education. Programs strive to help children and their families learn coping skills and express their grief with others who are also enduring a loss. Many programs offer concurrent workshops for adults during the sessions for children and/or activities for the entire family.

It may be advisable to speak with the child bereavement organization prior to bringing your child to the program. (Many programs require pre-registration.) Together, you can assess whether the program is a good fit for your child. Discuss the current needs and behavior of your child with a program director to get a sense of whether the services provided seem likely to offer a positive experience for your child. You may want to ask programs about the following: their experience with children grieving a traumatic or violent death; the ages of other children with whom your child might be in a peer or support group session; the training and use of volunteers; whether the program offers special events such as family activities or summer camps; and whether pre-registration or payment is required to access programs. 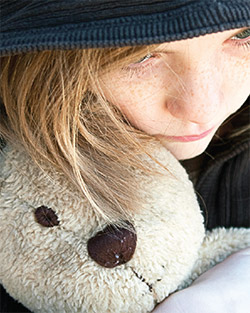 How Many Children Are Affected

There are about 4,000 intimate partner homicides in the United States each year, of which approximately 90% are of women by men. As a result of these homicides it is estimated that between 2,000 and 3,000 children a year in the U.S. are affected because the victim and/or the perpetrator are their parents. It is just as common, for example, as childhood leukemia (2,700 cases in 2001) or Sudden Infant Death Syndrome (SIDS) (3,000 annually). In the case of intimate partner homicide, a child loses at least one parent to a violent death and sometimes two. Significantly, approximately one-third are homicide-suicides in which the parent kills their spouse and then themselves. In most of the remaining cases, the assailant is convicted and spends many years incarcerated so the child has one parent dead and one in prison.

Since its creation in 2007, the Baltimore City Domestic Violence Fatality Review Team has studied numerous cases of domestic violence-related fatalities and near fatalities in an effort to reduce domestic violence-related fatalities through inter-disciplinary training and community based prevention education; and through data-driven recommendations for legislation and public policy. That evaluation process resulted in a critical recommendation pertaining to children. In cases where a child witnessed the murder of one or both parents as a result of domestic violence, no protocol existed to assess their trauma and determine what treatment these children needed or to facilitate access to counseling services. Unless a family member or caretaker independently sought counseling and support for the children, none was ever received. After studying those cases, a clear pattern emerged. Children who witnessed their parent’s murder went on to develop emotional and behavioral problems that resulted in juvenile and eventually adult criminal records. What follows is the Baltimore City Domestic Violence Fatality Review Team’s recommended protocol to be used citywide in situations where a child has witnessed the domestic violence-related murder of a parent.

What The Children Told Us

Given that little information is available about this group of children, a research team from the University of Virginia, School of Nursing undertook a study about the experiences of children who survived an uxoricide (the death of one parent at the hand of the other). To this end, 89 individuals were recruited in several major cities. Additionally, many participants referred their siblings. Participants had to be over 18 years of age at the time of the interview, and aged 19 or younger at the time of the homicide. The team of investigators grouped the data into themes to create a qualitative description of the participants’ experiences. A major theme, which almost all participants described, was when, how and with whom to talk about the homicide. Some participants were implicitly discouraged by their families to speak about the homicide at all. As one man said, “You would try to bring it up and somebody would shut it down like you had to move on.” An explanation for the family’s reluctance to talk is contained in this quote: “My family certainly didn’t want to talk about what happened because they were still exhibiting trauma over what happened, even though they wouldn’t admit it.” Others reported explicitly being told not to talk: “I remember my uncle saying stuff like, ‘that’s over with; you’ve got to put that behind you. You’ve got to stop acting like a little crybaby and a little sissy, and you’ve got to move on.’” 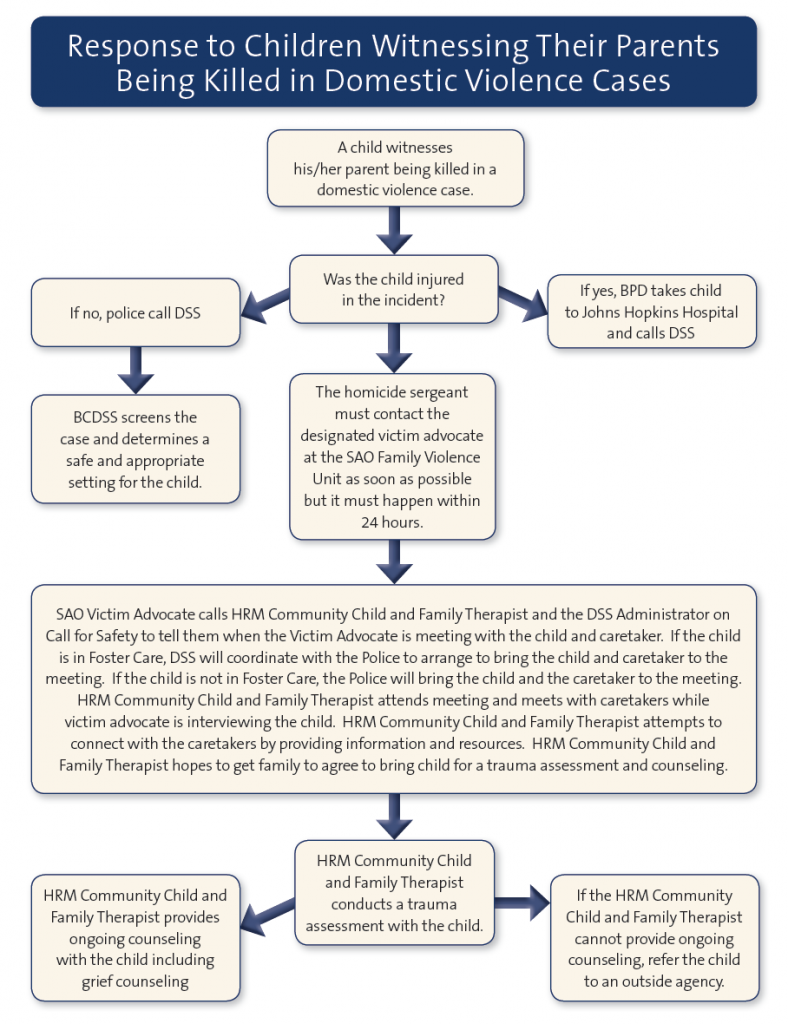 Developed by the House Of Ruth Maryland and the
Baltimore City Domestic Violence Fatality Review Team
with support from Fund for Change.

Are you anticipating having to go to court with a child? Many children are witnesses to the events leading up to or including the homicide. Attending or testifying in court can be a frightening experience. Rainbow House has put together a book, which is available through our shelter, that helps children understand the process. To preview the book online, please click on the following link. If you and your child would like to meet with our Youth Advocate and review the book in person, please call our shelter at (715) 735-6656.